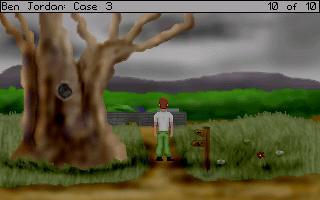 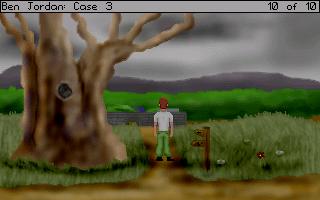 The tiny Scottish village of Smailholm has seen better days. Two local children have been murdered, and the villagers suspect it's the work of witches.

"This time our awkward hero is pitted against forces far beyond his reckoning. A definite high point in the series, the story is strong and the ending will leave you wanting to play the sequel. A must for fans of the series."

An excellent entry in the Ben Jordan games. You might say this is when the series comes of age. It's also the first time when Ben Jordan finally starts his globe trotting exploits and sets the stage for a much grand story (something that's waiting to be concluded in the 8th and final chapter). Also, 3 marks the first appearances of two characters who have made a significant impact on Ben. With a much more better developed atmosphere than the first two entires; wonderfully thought out puzzles; two endings; a dark macabre but thoroughly engrossing story marks the third entry in this great series as, perhaps, its watermark.
2010-05-16 16:21:24 by Pandaramaster
It is almost 5 years now since the release of the first game in the series. With 7 games out and the 8th and final set to come out soon, the series has changed quite a lot. One thing has stayed the same for me. Ben Jordan 3 is still my favorite of the series and my third favorite game on this site. This stunningly beautiful plot, script, and story blows me away everytime. What a step up from the first two, mediocre (in comparison) games. This I believe set the tone for the series and established it's popularity. It will always remain a classic on Big Blue Cups and will always have a place on my virtual shelf of games.
2008-12-18 23:21:25 by Ben Jordan Lover (sponeylogan)
Pretty good, actually. Good characters, nice story, and multiple endings. All in all, the series just keeps getting better and better.
2008-11-24 22:54:03 by Gun Sage (gunsage)
Really liked the game. Way better than 1 +2 . Nice effects added like rain. Music is much better and very varied. This version is a little less humorous but I like the more serious tone. It has multiple endings as well. great game
2008-06-01 00:02:27 by HailRain (hailrain)
With a lot to offer, this is probably one of the most interesting BJ cases.
Pros: Great characters, good plot, multiple paths, gameplay allows for a greater challenge.
Cons: Hmmm....honestly I can't think of any.

2008-05-27 23:35:15 by Snaker8
I was dissapointed by the fact that interactivity is largely limited to other characters for most of the game. Not many objects are needed or even identified as hotspots. Also I wished that the interaction icons worked the same as in Case 6. However, the game makes up for that by including a surprise twist that you must find out for yourself.
2008-01-20 02:22:25 by pandabearlove
I loved this game! Excellent story, characters and music. This is the first of the Ben Jordan series I've played, and I definitely must play the rest.
2008-01-18 04:10:07 by Lime
â€œZOMGâ€ was my comment when I finished it.
I always like multiple endings; it is really worth redoing to get the â€œgood finaleâ€.
The music was a brilliant match to the game. Itâ€™s worth playing just for that.
Atmosphere was constant, remarkable compared to its predecessors.
I found the cryptology puzzles fun to do.
Having visited Smailholm on holiday the one thing I would against it is the remarkable dissimilarity in reality.


2007-09-08 20:45:10 by Cephas (P Duffield) (Cephas)
That was most intersting, I took the bad path, so there were a lot of unanswered questions. The ironic thing was, not only was Ben confused, but me as well, I need to take the other path.
2007-07-20 20:49:09 by leon101
Now, this was a good surprise after the two first dissapointing episodes. The are two different paths in it and more to explore and finally a more mysterious story that unveiles itself and a surprising end (especially if you managed to take the good path with the full score). I really like the plot in this one! Somehow it reminds me of the movie "The Wickerman".
2007-06-24 18:00:04 by Optimus
There are 8 more comments that you can see >>>
I just finished this one. Great game. I really wasn't that impressed with the first two Ben Jordan games, though they were okay. Even Ben Jordan 1 Deluxe didn't do that much for me. But the third game is a fantastic improvement. The mood, the story, the characters and the puzzles were very good at drawing me into this game. I did find some hotspots hard to locate and the one unanswered question at the end of the "good" ending was driving me nuts (wondering what I missed) until I found, on the forums here, that it gets answered in a later game. Anyway, I really enjoyed this game and recommend it. Now it is time for me to play Ben Jordan 4.
2007-01-27 03:54:02 by CapCase
The best BJ game so far. Interesting story and characters, good puzzles and wonderful atmosphere. One of the best soundtracks. It's a shame the series didn't reach the same level after the 3rd part..
2006-07-17 06:41:12 by AnT hook
excellent work. *salute*
2006-06-08 23:25:50 by MissCrystalix
Fun, scary, challenging puzzles, non-annoying music, original story and amazing graphics. All the qualities of a perfect adventure game!!!

I'm so addicted to Ben Jordan and this game was so worth the time!!

2006-04-01 18:12:56 by CosmoQueen
Now I've always thought the first game was meteocor ok, and the second was pretty good, but not amazing. However, this game BLEW ME AWAY! What a huge jump from an ok game to one of my favorites, to a classic! This was amazing, the plot most of all! The puzzles were great, the graphics were really good, the little comedy was nice, it was tense at times and a little scary, the two way ending was great, and you really get into it. You have to play this now! Wow this was great!
2006-02-09 14:51:34 by Sponeylogan (sponeylogan)
Just finished this the third installment of Ben Jordan. As always the music is great and do a lot for the atmosphere in the game. The characters are also, as in the previous games, very well developed as they should be in a good adventure game (something I've been told I lack a bit in my own games :-) ).

The puzzles are a little bit more challenging then in the previous two games but still not that very hard.

This game also have two paths at the end with two different endings where only one of them will give you a full score while still leaving some questions unaswered so you need to play both paths to get the whole picture and all question answered.

All in all it's a very good game even though I hope that the next Ben Jordan case will have a little tougher puzzles for us to solve.

2005-01-12 23:25:10 by Joacim Andersson
This being my first venture into the Ben Jordan series, I was not sure what to expect. But what I found was a very delightful adventure game.

Starting off, you are immediately introduced to the story, and a handful of characters. This really helps to make the player feel immersed into the game, and gives them information that will make it easy to figure out what do next to progress through the game. This concept is fairly consistent throughout the game, and you're rarely, if ever, left completely lost in figuring out what do to; One of the game's strengths.

But it's also the game's weakness, as you never feel like you're being challenged. I got through the game with barely a pause to figure out what to do next. Everything is more or less out there in the open, with the story often telling you what to do or where to go next. Puzzles aren't very challenging, either, with just a little common sense being used (sometimes along with hints provided in the game) to solve them. In fact, I think the only challenge for me was realizing that some of the things I found in the game were just red herrings, leading me to believe there might be more to do. This is all good and fine, but I would have preferred something a little harder.

One other thing I feel is worth noting, is the extra work put into the game by providing a small "handbook" to read outside of the program itself. It fleshes out the paranormal aspect of the game a little more, and provides some tidbits to use at certain points in the game. Not that big a deal, but I really do appreciate little things like this that further involve you in the story and the puzzles.

All in all, this is an excellent adventure game, with a solid story and sense of purpose to keep you playing through it. But diehard fans of the genre might not be too impressed with lack of difficulty. Regardless, this is one game everyone should check out.

2004-11-03 12:39:48 by Jamesman
WOW! Being a huge fan of Ben Jordan, I nearly wet myself when I found this on the Completed Games board. And the laundry bill would have been well worth it for the chance to play this incredible game.

I have long been completely in love with Ben Jordan's debut case, the Skunk Ape, and I really enjoyed the longer second case although it seemed to be missing some of the incredible atmosphere of the first game. Not so Ben Jordan 3.

I could tell I was in for a treat during the games opening moments. Ben's arrival in Scotland during a ferocious storm was positively cinematic. As I continued to play I was inecapabley drawn into the creepy conspiracy and was determined to play until the end in one sitting.

The graphics, as always, are delightful and the range of characters superb. MILD SPOILERS: there is the new angle of a love interest and the superb idea to include a sceptical British detective who is investigating the same case as Ben and wishes he would stay out of the way SPOILER END. There are also multiple endings to the game depending on whether the player performs one key action. SPOILER: Both endings are based heavily on a popular horror film classic which many players will no doubt appreciate SPOILER END. The music also keeps up its high standard.

Basically, if you loved the other Ben Jordan cases you'll adore this one. It marries the perfect atmosphere of the first case with the length of the second and the brilliant characterisations of both to create Ben's best case yet. I can't gush much more so just play the damn thing!