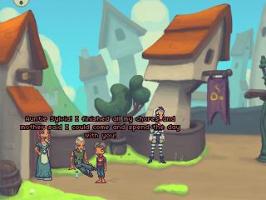 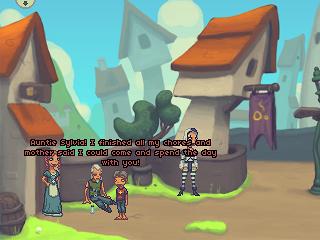 "Another snack-sized adventure by Ben, this one taking on a more conventional puzzle solving format. While Fadi's adventure is pretty straightforward, the visuals and humor will keep you interested until the end."

Nice graphics especially characters and their animations. Thanks for this cute game

This is the kind of game one does not describe by mentioning great graphics, nice plot and atmospheric music. This game brings a world to life. It is pure story telling that will inspire your thoughts and stimulate your imagination. It will leave you hungry for more and a bit nostalgic for a world you will be able to smell, see and feel, but only for a few minutes.

If the game seems a bit too edgy, it's because the author doesn't follow the classics. This this is the kind of game the classics are based on.

2009-10-03 20:27:31 by jkohen
a FUNNY, atmospheric game. and compared to heed you had the possibility to solve puzzles. As always good controls. At all great stuff, though it is a one-room game. Good on you! Alex from Germany
2009-10-02 08:15:50 by Ewianes
Once again, a very cute little game by Ben !
2009-10-01 08:37:53 by Marion
Ah, how this adventure of our young Fadi reminds me of the olden days, when bravery was stealing eucalyptus leaves from your neighbour's garden and heroic deeds could be done whilst fetching a haversack o'rye from the mill.

I, too, was one of these little adventurers whom nobody believed and who were never taken as seriously as they should've been - and look at me now! I am the most well-known venturer of the universe, praised for esprit and refinement of manners as well as exquisite use of heavy firepower to blast exotic evildoers back to their homeplanets, indeed!

But, listen to all that rambling! Nostalgia and yearning aside, fellows, here you find a marvellous game for adventurers of any age, 'tis certain!

2009-09-29 19:45:59 by Eglamore Crownswhip (egalotron)
A very lovely game! But the puzzles are quite easy and it's very short. It almost feels like an intro for a longer game.
2009-09-29 19:00:39 by Helme
If you have a few minutes to spare, this is a must play with a lot of people to meet, each with their own unique character but all very funny. Fairly easy puzzles. A perfect one to encourage newbie adventurers.
2009-09-29 16:04:44 by Leon
Awesome!
Artistic backgrounds, sprites, animations.
Humorous lines & matching music.
All in all just gorgeous.
The puzzles are quite easy/not too difficult.
Perfect sweet little game!

I must however admit that puzzles were way too easy, except maybe one which involved... uh... how should I say this avoiding making spoilers?.. "(slightly) advanced game mechanics" :).
In overall game looks more like a artistic experiment, or proving ground for artist's works. Or, maybe, a tutorial on how to play adventure games... but a GOOD one!